Today, Dave Monahan, CEO of Kleer, laid out a clear argument for implementing a dental membership plan in your practice or DSO.

If you did not get to catch the webinar, you can reply it below.

You can also download the ebook referenced at the end of the webinar.

Visit Kleer to schedule a demo. Questions about implementing a membership plan in your practice? Give Dave a call at 1-844-YO-KLEER or send him an email.

Below is a machine generated and therefore imperfect transcript of the webinar: 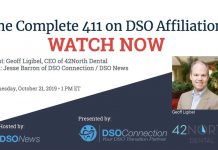 Watch now: The Complete 411 on Dental Affiliation with Geoff Ligibel of 42North Dental